We like the idea of a universal vegan symbol that is trademark free and already a part of the character set that all operating systems and platforms are capable of. The Ⓥ vegan symbol is commonly used by vegans to notate that they themselves or certain products are vegan, especially on social media. It’s a unicode symbol that is displayed universally the same on all platforms. The symbol did not originate explicitly for vegan use (in fact there’s a unicode symbol made up of a circle with a letter in it for every letter in the alphabet) however it’s hard to find other use examples for the Ⓥ symbol. Your encouraged to use it on your social profiles if you want to show your vegan pride, but be sure to use the word “vegan” whenever you can, as most non-vegans aren’t hip to the Ⓥ and we need to popularize and normalize the word vegan as much as possible. Moreover, if the symbol was say used on restaurant menu items, it could potentially be confused or misused as meaning simply “vegetarian” as it’s use is not regulated in any way. So until the day it might be universally understood as vegan, like the peace sign ☮ means peace, use the word Vegan along with it!

You can learn more about the Ⓥ vegan symbol at www.VeganSymbols.com, a memorable website that serves as a place to copy and paste the symbol from, or get HTML code that can also display the symbol. There you will also find animal rights symbols and other free images.

Some banner love for our top sponsors... 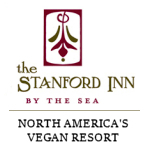 North America’s only vegan resort, the exquisite Stanford Inn by the Sea sits atop a meadow overlooking organic gardens and Mendocino Bay. The full-service AAA Four Diamond eco-resort is dedicated to ensuring that its guests are not only pampered, but enriched and enlivened. 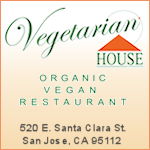 Organic Vegan Restaurant serving non-GMO cuisine with a variety of flavors from all around the world. Mostly gluten free with raw options. 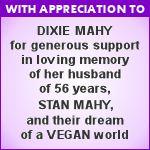 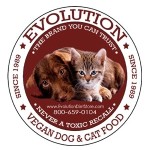